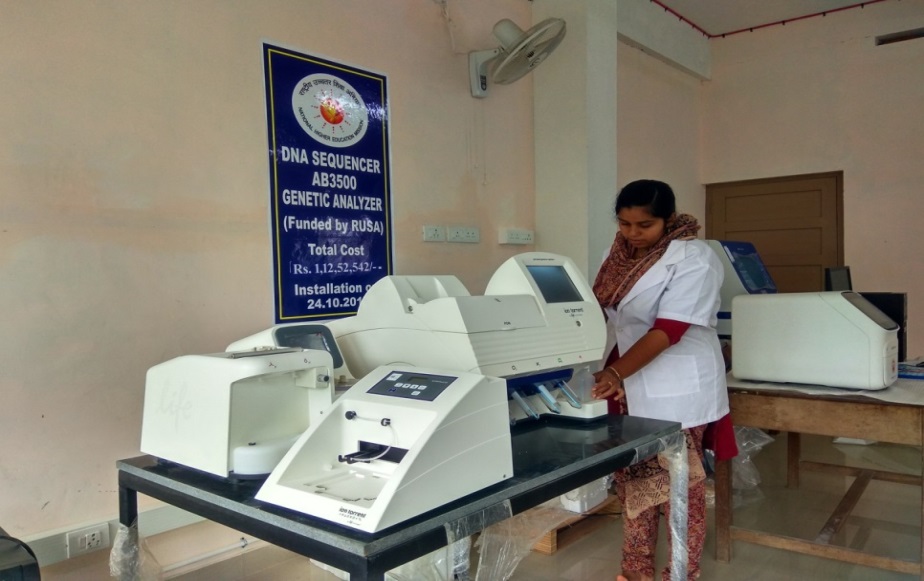 The AB 3500 Genetic Analyzer is a multi-capillary electrophoresis instrument designed to separate amplified DNA product based on size and record the resulting data in a computerized data file capable of being analyzed using specialized software.(ii) Capillary electrophoresis separates DNA fragments based on their size to charge ratio. The cathode is placed into the sample. An electrical pulse activates the migration and separation of the DNA through the capillary. The negatively charged DNA migrates from the cathode to the anode because of the attraction of opposite charges. Smaller DNA fragments migrate faster than larger fragments thus reaching the detector sooner. The DNA fragments have fluorescently-labelled primers attached so that when the DNA goes past the detection window, a narrow beam of light from the laser excites the dyes. The excitation of the dyes gives off an emission wavelength which is a longer wavelength of light than the laser’s excitation wavelength in all directions. Some of this light passes through a diffraction grating, which then sends the light to the CCD detector. The CCD detector can detect the colour based on the wavelength. Along with an internal size standard and allelic ladder, a software program takes these peaks that are detected and give it a specific allele designation for a given locus. The combinations of all of the fluorescent peaks give rise to an electropherogram.

The 8-capillary 3500 DNA analyzer can be used for traditional DNA sequencing and DNA fragment analysis applications such as microsatellites, AFLP, SNP analysis and mutation detection..

Fee details and submission of application

For fee details, please visit https://kusicc.ac.in/analysis-rates/. The request form for the instrument shall be downloaded from https://kusicc.ac.in/downloads/. Read the instructions given in the form and at the bottom of the analysis rates page carefully before submitting the application. Proper method and area of focus for result has to be mentioned for accuracy.